Critter of the Week: A Furry Weatherman 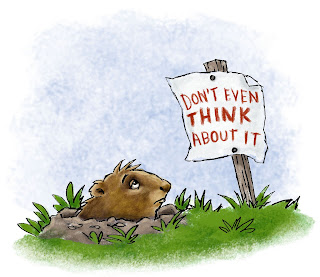 The Groundhog (Marmota monax) - harbinger of either an early appearance by robins and daffodils or six more weeks of thermal underwear. One declaration will garner it praise and cheers. The other will have folks thinking about braised woodchuck with some fava beans and a nice chianti.

As a semi-vegetarian who avoids eating land critters, but can't give up shrimp scampi, I have been inspired on past February 2nds to entertain the notion of groundhog burgers when the stubborn varmint insists on seeing his shadow. Especially, when I find myself tunneling through snow drifts taller than me to get to the lump that might be my car.

Many have tried and failed to influence the outcome of these predictions. Wishful letters á la Santa Claus or the Great Pumpkin, bearing messages like "Dear Mr. Groundhog, I've been real good this year. Please sleep in." generally end up shredded by the recipient, who prefers comfy bedding to written correspondence.

Bribes have spanned the spectrum from humble to lavish. Small and sincere offerings such as nuts, candy, or fruit baskets don't seem to make as much of an impression as the gold-plated tooth sharpeners or gift certificates to rodent-friendly spas given by fans wanting to spend extra time on the slopes in the Poconos.

Those truly adverse to more high heating bills have resorted to threats, some going so far as to make sure the only shadow cast on that day comes from a large, hulking figure looming over the hole, clad in shades and brass knuckles. Little success has come from this approach; the furball just pops up from another, safer location.

2010's Snowmageddon drove one enterprising and exasperated soul to empty several concrete mixers onto the burrow and a 500 yard radius around it, only to later receive a collect call from Australia through which a squeaky voice proclaimed, "I saw my shadooooow!"


As of this writing, we've had a winter too anemic for any self-respecting Groundhog to extend. Still, February is a schizoid and fickle month; a precarious minefield through which we must travel to reach March's gateway to warm and sunny outdoor playtime. Anything can happen during those weeks and usually does.

So, we fair-weather aficionados are left to prepare in the best way possible. I just hope the little rat likes the 60" plasma television I sent him.

UPDATE: Apparently he didn't. Strike up the grill.